Ok agility and other miscellaneous dog peoples: what does your actual week of training look like? And is this by default or choice? Do you have a more ideal sked or plan in mind? Details please. Or not.

We earned our C-ATCH this weekend!!!! Yay TEAM STELLA!! (Bronagh and I started training her together even though everyone told us two different handlers would be a bad idea and then she went off to college two years ago and just ran her summers so this year my plan was during the year to get her as close as I could so Bronagh would put her over the top when she came home and voila!!!)
I had so much fun watching them run together--so proud of the three of us.

Whats the matter with me, am I getting blasé?
I just went to the club's website that put on last weekend's trial to double check the results for our records that Stel and I  actually Qed a wildcard run I thought we had... and I see that the two Q ribbons (wildcard and snooker) I failed to pick up were BLUE!
I always used to rush to get the results... Crowd around the table... Politely waiting for an opening to move in and grab the sheet... We have two shoe boxes jammed with ribbons. I know some people stop collecting the ribbons at some point. I've seen a couple people just take their stickers and put them in a record book... not even bothering with the placement colors except for them big milestone pretty ribbon triumphs. but i forgot to even go in and get a few of the stickers!

I guess I was more about just hanging and running this weekend than being actual results-focussed... A new friend made a place for me in her easy-up in a row of easy-ups of people I am in classes with and I guess people I have known from seeing them at trials, I am getting to know better. Even Stella had a little off leash playdate at the camp site... We did have a couple runs that felt spectacular!

For the record we Qed 8 outta 10 over the weekend. And I took home all our fourth and second place ribbons... evidently forgot the blues. BUT the weekend didn't start out pretty. The first run was Fullhouse and yeeehaaaaw hold onto your hat its all a blurr now and on our first standard run, second run of the day, more yeeehaaaaaw, my RDW sureshooter she blew EVERY single contact---it was shocking, down in a blaze-of-glory NQ.

And also... our last run, kicking myself, I thought about scratching her and I now know next time Stel looks down-in-the-tail, unenthusiastic about warming up to run, just to go with my instincts... I had walked that last jumpers course for a faster happier dog and was way ahead of where I thought I'd be and kind of never got in sync with her, we even had a freeze moment, but ultimately finished the course clean but overtime... it was clearly not fun for her, she was too beat (five runs a day both days is alot) or just fried.

Part of the reason for her frying might have been we overnighted in Pearl and it went down to around 30 during the night... she started at my feet with a sleeping bag over her, but woke up and came and curled up with me really snuggle bunny close in the sleeping bag. Poor girl. And then in the morning she was all territorial and edgy as everybody started arriving, like sleeping there and surviving the cold made it her place.

But, really, over all we had a blast. Some really great runs... and our snooker Q? we were the only 20 incher that Qed and yup, we got all sevens... fun! 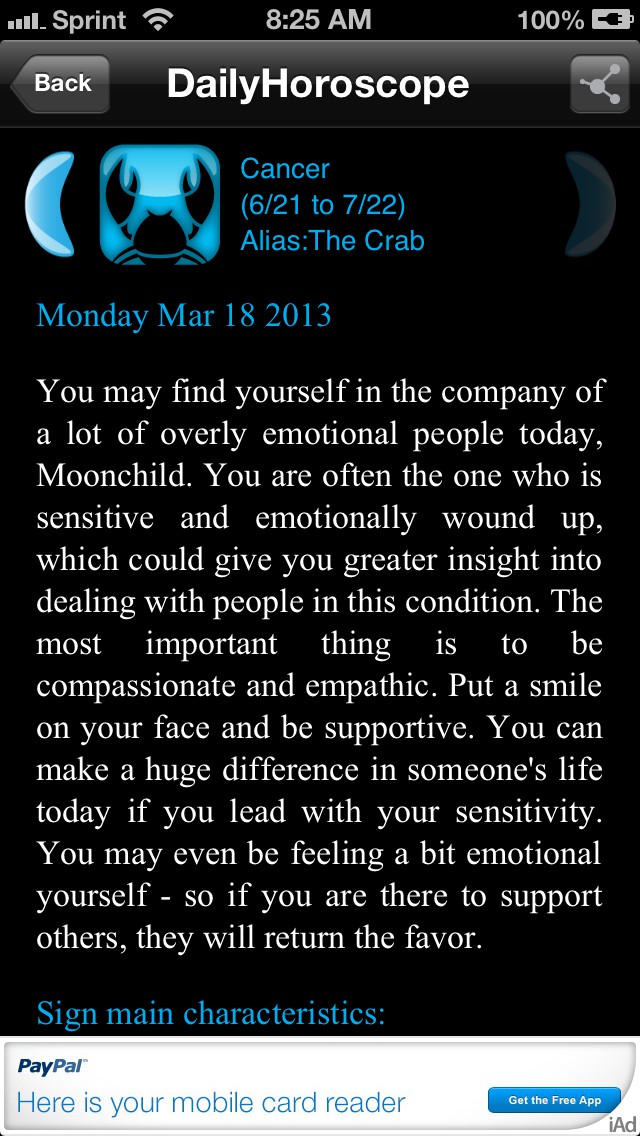 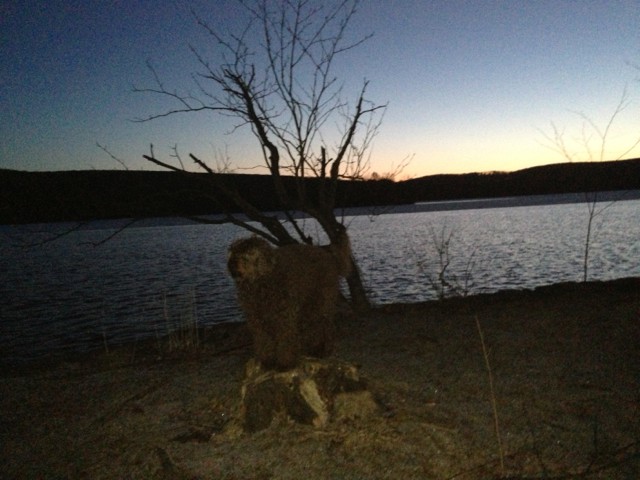 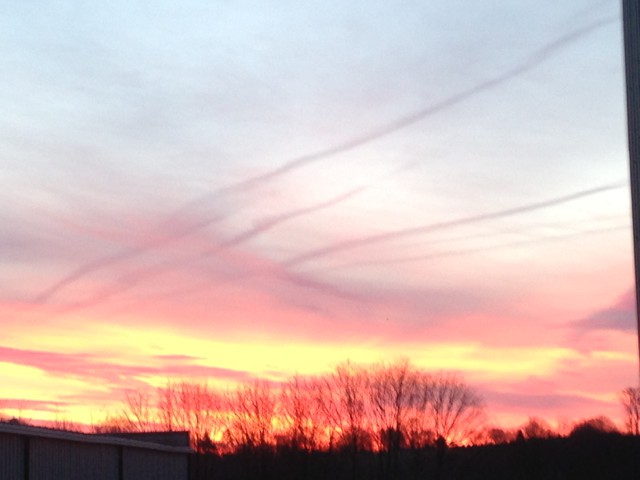 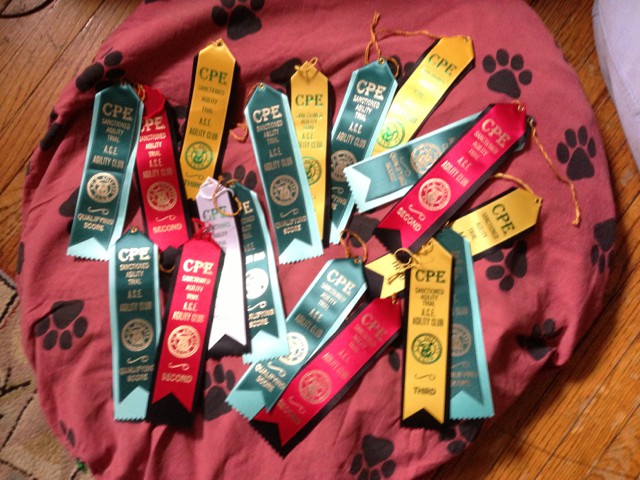 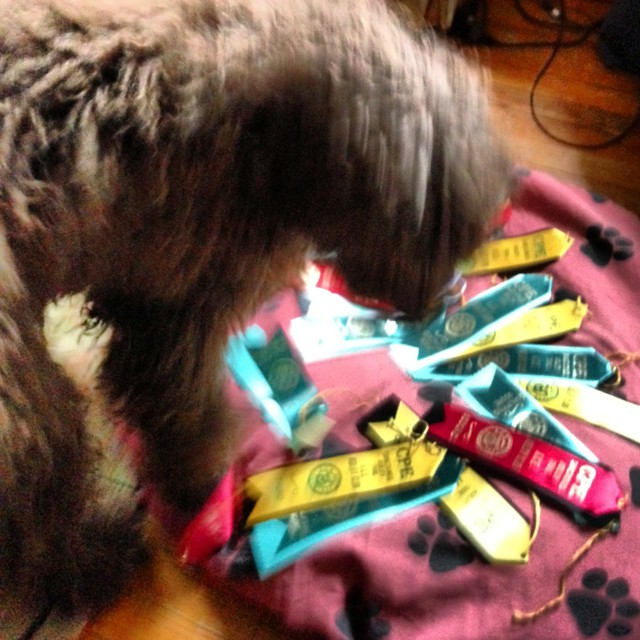 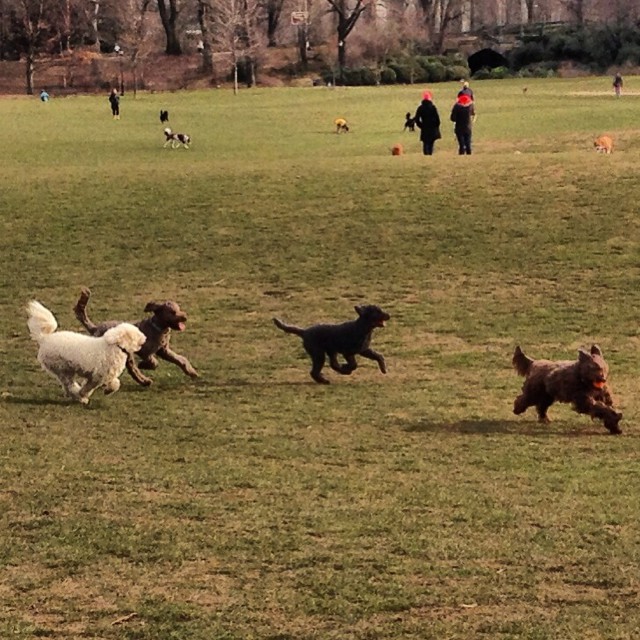 I sent in the entry late, so we only got into today's two runs for this weekend's trial... too bad cause Stel's in good form. Tight. Focussed. Happy. Fast. And Game. Two blue ribbon Qs and our strategy games L4 title. It could have been another "perfect weekend" in the making! and ACE has pretty ribbons... I remember over the summer B wanted to come in sixth because of the pink ribbon...
Anyhow, its actually going to be really nice to have a weekend, a plain old weekend. Stel can rest on her laurels.

Why do you do agility?

Three certificates --- CL1-H, CL1-F, and CL1-R --- for Stella arrived in the mail today. I'm glad someone was keeping track, because I had no idea she/we achieved any titles...

B and Stella's first agility trial ever... CPE hosted by SCAT in Westbrook, CT... No Qs. A third place in Jumpers and second place in Wildcard... NT in both Standard and Colors... we learned a few things...

B has been working on focus. Being green Stella sometimes has a tendency to run off course, investigate new surroundings... sniff, get the zoomies... And we thought B not being able to carry treats in the ring might be a problem. Anyway, it turns out that I am the problem.

Each time Stella went in the ring with B she wanted to know where I was. Each time it was worse. They did get through the whole first course, finished the event, Jumpers... with all kinds of off course faults and overtime...

In their second event, Colors it was kind of a nightmare, Stella started on the course, did the opening sequence with the DW and what B thought was the tricky part beautifully and then went to look for me... she ended up running out of the ring twice to look and when she couldn't find me, climbed an A-frame outside the ring... saw me on the other side of the wall, came down and found her way around to me... B, left there standing alone, thanked the judge and left the ring. There were tears, she was pretty angry... mostly at me for existing.

I reminded her of what Terri Cesarek had told her at her last lesson at CSC... that she had to be more interesting than horse manure... unfortunately on this day, apparently the horse manure was me...

The third event was even worse. Mainly because B was so confident about how she was going to handle the Standard course, the opening sequence was pretty much the same tricky sequence as the last course she chose in Colors... she came back from walking it knowing exactly where she was going to front cross, call the next obstacle early, say here, call the dog's name, feeling it was going to be a piece of cake... We found out she could ask the ring steward if they would close both entrance and exit gates, so she was also sure Stella wasn't going to run out to look for me... We decided this time I would hide, I would not be there when B took Stella out to warm up or wait to go in... B would have her total focus, I wouldn't be there to divide her attention, but B later said Stell was whimpering, looking for me... and, then right before they ran a Great Dane spooked Stella, she sat at the start line facing backwards barking at the monster-sized dog and when B released her she completely ignored her and first went to yell at the great dane and then she just did a bunch of panicky laps around the perimeter of the ring, looking for a way out and nothing B did could get her attention--until the times-up buzzer sounded and then Stella finally took the first jump. The judge then told B to just put her over a couple of obstacles and then take her out... more tears

There were lots of kind people with advice. Everyone with their own first-time or run-away dog story. We met such nice people. Our meet mentor suggested if Stella went off again, to ask the judge if she could do the course FEO - on leash. Not to rehearse the unfocussed behavior. Someone else suggested just putting her over four obstacles and then thanking the judge and taking her out and rewarding her with cookies. I could see B consider these options, but not really... B wanted to handle Stella over ONE entire course... The mentor also suggested B really get the scent of treats on her fingers and hold her fingers as if she really had a treat on course... There were other suggestions, someone said I should tell Stella to GO play! when she goes into the ring with B. Someone else said there was a flatwork book at Clean Run to buy and check out agilitynerd.com/blog/... But then this couple we have seen at CSC told us about how after several months of trying to figure out how to handle a similar attachment problem--the dog running with the woman but worried and looking for the man--they figured out that the man had to stand right ringside. The man also said B and Stella should take a nap in the car with the air on... these last two pieces of advice proved to be valuable.

Did I mention Stella's nerves were also fried by the millions of flies everywhere (this venue is a Hunt Club) and she couldn't nap, not even in her crate. Tail down lemme outta here, everytime one buzzed her.

For their last event, Wildcard, I stood up close at the edge of the ring, right behind the first jump and Stella ran the entire course with B... (with one digression to look for me, but after finding me she went right back to work) even when B called her off the right end of the tunnel to send her in the wrong end she did what B asked... it was great... there was the tire taken backwards the first time and some pauses for confusion, but B was thrilled---and EVERYONE cheered for them... it WAS a victory...

and they went home with two pretty ribbons

Their nightmare start in Standard, going the opposite direction of the course, barking at the Great Dane got deleted--but its kind of burned into our minds... this is just a 30 second sample of what seemed like eons of Stella's panicky running the perimeter completely deaf to B until it was over


I think she skips the second jump in this last one cause she's never seen anything like it before, does a run by and then is happy to go back and take it... of course there is the little unfortunate check in with me, but its over fast and once B gets her back she's got her, makes that tight turn after the tire, doesn't take the wrong jump waiting there for her... only thinks about sniffing once after the last tunnel... Stella doesn't like the feeling of going off course, she'd much rather stick with B, you can see she loves it, as long as she knows I'm still right there I guess somewhere

we need to bring more water next time, food and snacks B likes, a crate area rug or tarp... and for sure I'll be ringside until Stella has confidence out there... because there will be a next time, it might be in a couple months or not until spring or summer but---B loved it.
Collapse